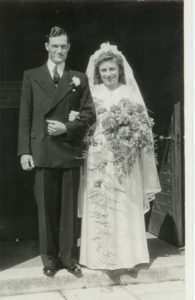 WEDDINGS IN THE 1940S’
World War Two is rife with romance amid the suffering it brought about and the pain of separation and loss.
Those women who stayed at home prepared themselves for only the briefest of weddings, their service sweetheart having only 24 or 48 hours leave. An old acquaintance of mine was serving in the RAF when she found herself pregnant. Dismissed at once and married in haste.
Whether or not a shotgun wedding, when a proposal was made and accepted, there was little time to get a special dress besides which few had enough coupons to buy something new.
Family members or friends donated what they could whether clothes or food, to ensure the bride had a wedding dress and a cake.
Parachute silk was much valued for sewing up into a wedding dress or alterations done to something inherited from mother or a grandmother married in the Victorian era when dresses were made from yards and yards of useable material – perhaps even enough to make dresses for bridesmaids. Gardens were raided for the bride’s bouquet, corsage or headdress and hats were either made from what was readily available or borrowed.
Dame Barbara Cartland, related to Princess Diana and founder member and vice president of the Romantic Novelists Association joined St John Ambulance during the war responsible for women’s welfare. In that capacity she set herself up as a voluntary wedding planner, sourcing wedding dresses from society friends and urging them to donate and lend what they could to service brides without either the time or the means to source anything of note themselves.
Not everyone got married in white or in a dress. Some women had no option but to marry wearing a uniform or utility jacket and skirt or dress. The men of course looked best in uniform. The marriage of Joe and Phyllis Pound took place just after the war. He’s in mufti, but had spent five years including a spell in North Africa and the Far East.
As for honeymoons – whether serving at home or abroad, time was precious to both the War Office and the married couple. Perhaps two nights, but sheer joy if it ran to a week! Some of those marriages lasted a lifetime. After all, a wedding day is just that, a day. A marriage back then was meant to last forever.

I’m writing this on the 6th of June. D Day so very apt for an author who writes a lot of books set in WW2. The fifth book of The Tobacco Girls series, Marriage and Mayhem, will be published on the 3rd of August. In the meantime I’m writing the first book in a new series for Boldwood Publishing (though The Tobacco Girls will continue). The new one begins in 1936. All hush hush but it’s going well.

I’m also half way through the second book of The Celtic Chronicles, a complete departure from what I’ve written before. All I have to do now is get a publisher. Fingers crossed.